Who was Robin Hood or Robin of Nottingham?  In 1191, King Richard is battling during the Crusades to restore Jerusalem to Christian rulers.  The fight is beyond formidable, and King Richard has basically forgotten or is ignoring the problems rampant in his English kingdom.  Additional taxes have been added for the war, and the middle and lower classes have grown desperate, first to pay and then to protest those burdensome taxes.

This is a simple story mixing reality, myth and legend.  King Richard and his army in Palestine are awaiting a shipment of arms that have not arrived on time.  Peasant marauders at home have waylaid that shipment, and soldiers Robin and William have been sent back to England to find the missing arms.  As they approach Sherwood Forest, they are attacked. They then meet the Guards of Nottingham, composed of soldiers and former prisoners. They also meet Marion, a woman trying to find solutions and goodness in a society riddled with crime and violence. Little John, or John Bassett, is a decent, proud and admirable character who suffers greatly when he is captured. Guy of Gisbourne, a crooked Sheriff, and other characters meant to impose justice and fairness fail miserably and boast about their crimes. Teasing apart the guilty and innocent characters forces Robin to reassess his understanding of the King and his laws.  Moments of humor throughout the novel reminded me of scenes from Monty Python stories.

Nathan Makaryk has fashioned a remarkable and comprehensive story about the realities of life in 12th-century England.  Nobility of character lies beyond appearances. This is unique fiction that compels revision of the Robin story and its place in history. 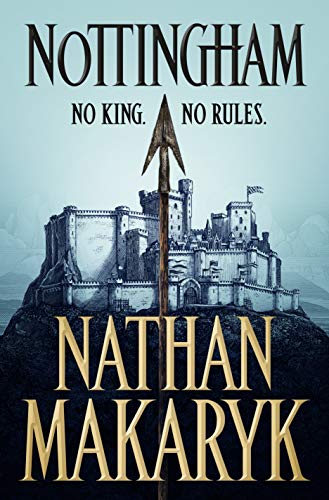