Murder at the Chase (A Langham and Dupré Mystery, Book 2)

Mystery author Donald Langham has invited his girlfriend and agent’s assistant, Maria Dupré, on a weekend in the country so he can propose to her at exactly the right time and place. Unfortunately, their romantic trip is disturbed when Donald learns that Edward Endicott, a friend and fellow writer, has gone missing. Alasdair, Edward’s son, is worried his father is the victim of the otherworldly powers of a supposedly 130-year-old Satanist, the subject of Edward’s latest book. As Alasdair and Edward’s friend, a former Hollywood actress, despair of finding Edward alive, Donald’s common sense and his determination to solve the mystery so he can get on with proposing prevails.

Set in the 1950s, this closed-room mystery offers a delightful cast of characters and plenty of twists and turns that kept me guessing. Droll and sophisticated while at the same time full of village charm, the characters and the setting drew me in immediately. Donald’s skeptical outlook, juxtaposed against Alasdair’s gullibility and willingness to believe in the most outlandish things, was entertaining, and even when the subject matter turned dark, the author wrote with a light touch. Murder at the Chase proved to be an enjoyable and entertaining read. 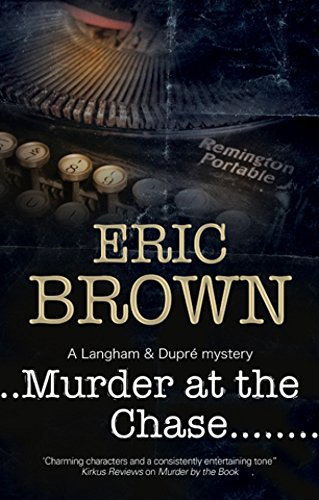