In the late 19th century, Oceania—a vast expanse of sea, dotted with the occasional landmass, from the huge continent of Australia through to tiny, insignificant islands—saw a substantial movement of people. European colonisers came, settled, and moved again somewhere better. The new need for labour, brought by the colonisers, saw many natives of the region move from their original homes, either by choice or by force.

Lydia Syson’s new novel provides us with an insight into this shifting, mobile world. Set on a remote volcanic island, it tells the story of one European family trying to create their own paradise, and of six Pacific Islanders who have travelled across hundreds of miles of ocean, seeking work. One of the Peacock children disappears shortly after the men arrive. In seeking him, this new, fragile community uncovers the dark secrets at the heart of their new Eden.

Told from the points of view of Lizzie, one of the Peacock daughters, and Kalala, who has come to the island seeking new horizons, Syson’s novel is beautifully imagined and written. The relationships between the characters are skilfully drawn. The dark web of power, possession, dependence and love that binds the Peacock family together is compelling, as is the mixture of protectiveness, grief and wistful misunderstanding between the brothers Solomona and Kalala.

From the very beginning, the reader is exposed to a creeping sense of dread, an understanding that there is more happening on the island than meets the eye. As the truth is uncovered and innocence is lost, the novel makes its way to its dramatic and disturbing climax and the ties of love and loyalty that bind the characters together are tested to their limits.

Powerful, intense and beautiful, this novel will stay with me for a long time. 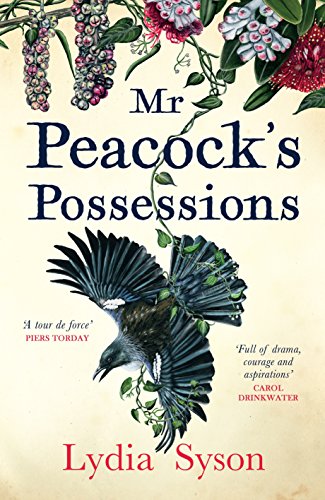