1970s London: Jonah has always struggled to fit in at school. He’s too busy to make friends, spending his time caring for his mother, who had been paralysed after having been knocked off her bicycle by a lorry. He also has profound shyness he cannot overcome. His one ‘almost’ friend is Valeria, a Russian immigrant who speaks little English, but who sings and plays the clarinet beautifully. Both are outcasts, loners. Jonah often hides in the school chapel to escape the bullying from the other children, and this is where he finds a button. It soon transpires that the button belongs to Nathaniel, the ghost of a boy from the 18th century, and someone who may be able to help Nathaniel through his own story. Both stories become intertwined, especially through music, as Nathaniel was once Mozart’s companion. Can the lucky button work its magic again?

Lucky Button is a beautiful, moving historical timeslip story inspired by The Foundling Museum, which is devoted to telling the story of the Foundling Hospital, Britain’s first home for abandoned children. Morpurgo is a master storyteller, and this book is another amazing piece of writing. It is a story within a story, exquisitely illustrated by award-winning illustrator, Michael Foreman.

Morpurgo brings to life the characters from both centuries and, as with all his writing, brings in social and political events from the time periods, such as attitudes towards foundlings in the 1800s and immigrants in the 1970s. It is a beautiful book in every way and highly recommended. 8+. 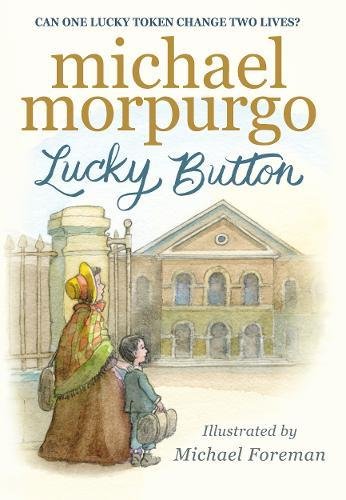