Hitler’s First Victims: And One Man’s Race for Justice

This is the account of the men who were the first to be incarcerated in the newly-built concentration camp at Dachau, near Munich. They arrived at the ramshackle camp in April 1933, just a few months after Hitler became Chancellor of Germany, and many were badly beaten and some murdered by the brutal S.S. guards. They were mostly left wing “politicals” and/or Jewish and were thus hated by the new intolerant regime that had seized power. Concerns were expressed in legal circles about the nature of the deaths, which, so early in the Nazi’s reign of terror, were still exceptional. But even then, in the very early days of the National Socialist state, the whole ethos of S.S and associated organisations was founded on violence, hatred and an enthusiasm for brutality and killing. The Munich attorney who was most concerned by this spate of illegal torture and killing was Josef Hartinger, a brave man who was determined to bring to justice those who were responsible in the camp for these deaths. It is doubtful that even he, who saw at first-hand what the new regime was capable of, would have understood at the time that this was just the harbinger to an unprecedented litany of massive cruelty and death. 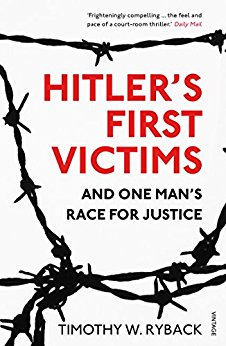