The story is set in the 1640s, starting off in Japan and then going via Amsterdam to England at the time of the Civil War. Midori Kumashiro, the very engaging and feisty heroine, is the orphaned daughter of a samurai warlord who has to leave Japan for her own safety. She has no choice but to flee to England. Although she is trained in the arts of war, will she able to survive the journey with a lecherous crew and an attractive captain she doesn’t trust?

Captain Nico Noordholt of the Dutch East India Company had come to Nagasaki to trade, and he reluctantly agreed to take a female passenger back with him. How could he protect her from his crew when he was attracted to her himself? During their journey Nico and Midori form a tentative bond, but they both harbour secrets that can change everything. The final third of the novel takes place in Plymouth with a civil war brewing and in which all the major characters get involved in different ways. The politics and religion of the times and how the war affected Plymouth are all handled very well.

This novel is a sequel to The Scarlet Kimono, which tells the story of Midori’s mother Hannah and her father Taro Kumashiro. Some of the back story is revealed in The Gilded Fan, but you don’t have to have read it to enjoy the sequel. It stands alone and can be enjoyed for its own sake. The copy editor and proofreader also deserve a mention as, very unusually, I did not detect one error – and I always find at least one! All in all an extremely pleasant aesthetic experience. 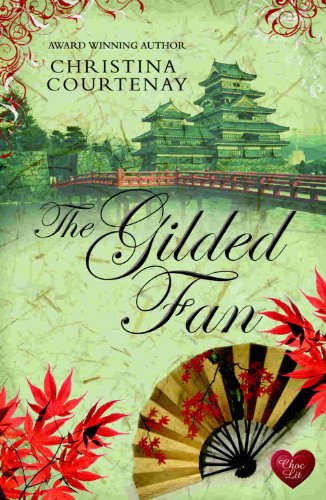