When yet another young woman surfaces claiming to be Lord Lexham’s daughter, abducted in Egypt twelve years earlier, powerful family friend Lucien de Grey, Duke of Marchmont, rushes on the scene anxious to unmask the imposter. But rich, fashionable and rakish Marchmont, who keeps his pain and grief over the early loss of parents and brother locked behind a jaded façade, encounters instead Lexham’s legitimate daughter Zoe Octavia, the Duke’s childhood friend. Zoe had been rebellious and prone to running away in their youth and though the Lexhams are rejoiced to have their youngest restored to them, her captivity in the harem of an eastern Pasha creates a scandal. Marchmont, however, vows he will present Zoe to the Queen and launch her into fashionable society.

The acculturation of Zoe to English society and her sexual awareness gained in the harem are fresh elements in this clever late Regency romance. Don’t Tempt Me is well paced and entertaining, with amusing secondary characters playing off the engaging principle couple. A subplot involving a vengeful servant seems unnecessary; the romance of Zoe and Marchmont, their discovery of connections to one another, family and community suffice to make this a highly enjoyable story. 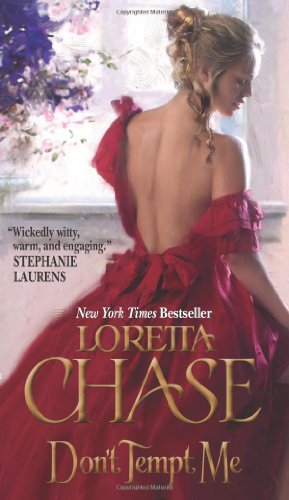