In the aftermath of the Battle of Poitiers, Sir John de Hawkwood, having fallen foul of his commanding officer (Edward the Black Prince) and failed to gain as greatly as he had hoped from the spoils of war, leaves an estate ravaged by the Black Death and a loveless marriage to seek his fortune among the warring states of Italy. By a combination of military skill, good luck and downright cunning, he makes his fortune, his reputation and finds the love of his life in the complex world of Guelph and Ghibelline, ending his life as a hero of the Florentine Republic who was later to merit a mention in Machiavelli’s The Prince. Crockett offers a humane and well-rounded portrait of a man whose historical persona is contradictory. Military genius or a lucky freebooter? Talented commander or an unsophisticated bully? In Crockett’s eyes he is all these and more.

The historical detail is extremely well researched, though sometimes this militates against the novel as Crockett tends to lapse into history textbook mode. Describing the predations of the Black Death, for example, he gives details of the disease’s route through Europe, which is irrelevant to Hawkwood’s perspective. The many battle scenes, drawn with enough clarity for even this peace-loving reviewer to follow, shift uncomfortably between Hawkwood’s viewpoint and the historian’s overview.

On the other hand, Crockett’s evocation of the sheer discomfort of fighting in armour – the weight, the chafing, the heat – is wonderfully vivid. He is also good on the small details which bring a period to life, such as the types of food eaten, the medicines used and the superstitions to which people adhered.

If you enjoy a military romp, with plenty of sex, though not the subtlest characterisations of women, this is for you. 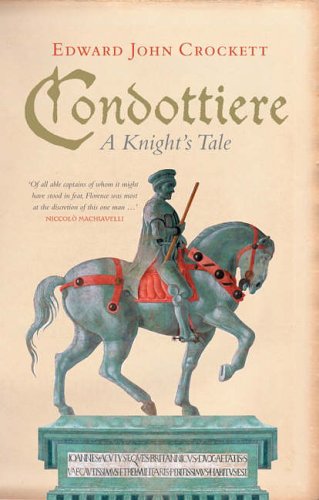