Cher Ami, a champion racing pigeon—and heroic World War I veteran—has the first say in this novel. She’s speaking decades after the action, from her perch in the Smithsonian. She’s a stuffed exhibit but takes her situation with so much philosophical grace and humor that I was immediately won over.

Alternating chapters are from Major Whittlesey’s perspective. A lonely, unhappy man, he’s tortured by survivor’s guilt and loss. His story isn’t straightforward like Cher Ami’s, but wrapped in mystery. Despite his having become a successful Wall Street lawyer, he was a disappointment to his parents, never as manly as his brother. So it’s partly from that childhood wish to be loved that he enlists.

Cher Ami, on the other hand, is donated to the cause by the trainer who raised and loved her. (She isn’t Chère Amie because that same trainer, nor anyone else, ever realized she was a female.)

Together, Whit and Cher Ami tell how the “Lost Battalion,” the 308th Infantry, 77th Division, under Major Whittlesey’s leadership avoided surrender and how Cher Ami flew out, through gunfire, to summon help. Amazingly, this is a true story. I googled “Cher Ami” and then “Major Charles Whittlesey” so I could see their photos.

This could have been a sentimental tear-jerker. Who wouldn’t cry over a World War I story, featuring a sensitive, tortured officer and a brave, thoughtful messenger pigeon; that is, a dove. The pathos might have been awful. But not in Kathleen Rooney’s elegant and well-researched telling. From its first lines, hearing Cher Ami’s voice, I relaxed, knowing that even if (if?) the story turned out tragically, it was true in the way the best fiction is, with wit, intelligence, insights, and unexpected turns in the plot. Recommended. 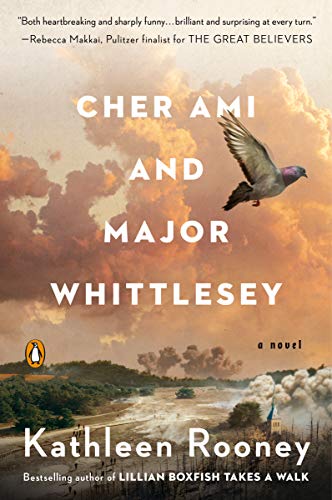