1346, the Welsh marches. Young Hugh Fletcher lives with a band of outlaws. After a run in with the tyrannical Sir Henry Mortimer of nearby Goodrich Castle, Hugh realizes that the outlaws are now marked men. If they are to survive, not only must they become disciplined longbowmen, they need an impregnable base in the forest. And he can deliver both.

Soon, Hugh’s skill with the longbow attracts the attention of Sir John Carey, who’s raising a company of longbowmen to sail with King Edward III to fight the French. If the outlaws fight under Sir John’s standard, they will cease to be outlaws and, furthermore, there will be the possibility of loot. For Hugh, it is an opportunity to show his qualities of leadership and his band’s skills. Both will be tested to the uttermost against the superior might of the French army.

I really enjoyed this: think Robin Hood meets Bernard Cornwell for boys of eight plus. There are plenty of fights, escapes, and the dastardly machinations of Sir Henry’s henchmen who have orders to kill Hugh, all leading up to the battle of Crécy which changed the course of English and French history. We know that Hugh’s longbowmen’s skill will either save the day or lead to ignominious defeat. Hugh himself, naturally, shows courage, intelligence in understanding the importance of battle tactics, and an ability to inspire his men.

Ronald Welch obviously knows his history, and I enjoyed his account of how to make, look after and shoot a longbow. He also knows what will interest small boys: plenty of adventure with lots of danger and some splendid set pieces leading up to and including the battle of Crécy. Great stuff.

(Ed. note: To purchase this edition, see the publisher’s site rather than Amazon.) 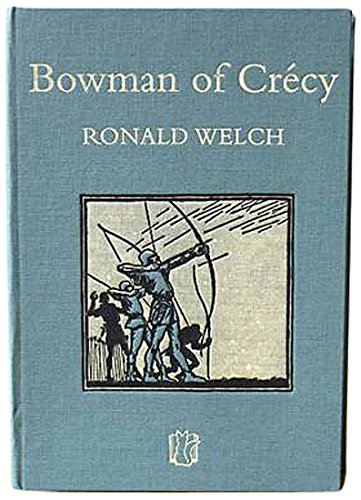