After the War Is Over

Exploring the aftermath of WWI in England, this story follows Charlotte Brown – a character from the author’s previous novel, Somewhere in France. Charlotte, who worked as a nurse during the war, has resumed her position as a constituent aide in Liverpool, helping women and children in need. As a Women’s Rights activist, she begins a correspondence with a local newspaper editor that results in a weekly column focused on social issues.

She strikes up a fast friendship with her new collaborator and admirer, as they have much in common, but she still harbors tender feelings for another. The unattainable Lord Cumberland had hired her straight out of college to finish his youngest sister’s education and for several years before the war the two young women were inseparable, though greatly divided by class. Lord Cumberland, returning injured from an extended captivity and barely recognizable, seeks Charlotte out with an impossible request, interrupting her carefully ordered new life.

This is an eye-opening view of post WWI England, when patriotism was high, with celebrations on Remembrance Sunday and Armistice Day, but many families were broken and destitute. Women were displaced from their jobs by the men returning from war, and countless soldiers had unseen psychological issues that went untreated. Charlotte, years ahead of her time in terms of forward thinking, makes an estimable protagonist, and the storyline is both believable and obsessively readable. I highly recommend this book, especially for those interested in WWI fiction. 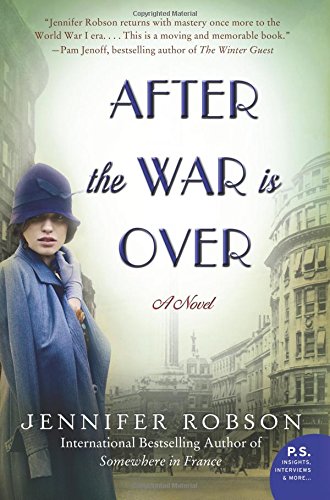