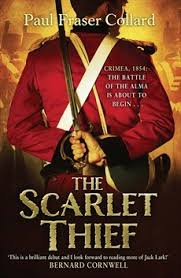 RL: Why the Crimean War? In my mind it is associated with Florence Nightingale (therefore, the wounded), with the grainy photos of Roger Fenton, and with several tomes by Alexander Kinglake that I have never got round to reading. So none of the elan that generally goes with Wellington…

PC: It is certainly a less well-known campaign, but that seems to be changing with a few works of historical fiction now set in the Crimea.

For me, there were two reasons to choose the Crimean War as the backdrop for The Scarlet Thief. Firstly, it was something I knew so little about. I had learnt so much about the Peninsular War by reading Bernard Cornwell’s Sharpe novels that I was intrigued to find out more about the campaign and battles fought just forty years after Waterloo. The Battle of the Alma was a classic, set piece, battle, where British redcoats still fought in the grand old style, so it was a perfect setting for my character Jack Lark’s first battle.

The second reason was a little more pragmatic. Few areas in historical fiction are not already very well populated with seriously good writers. When I started on The Scarlet Thief, I felt there would be room for me in that period and I would have a better chance of getting agents and publishers interested in my work if I travelled a less well-trodden path.

Luckily, for me, Jack is destined to go here, there and everywhere, so I knew when I started out that I would never be tied to one war, one single campaign or one series of battles. That made the choice a little easier as I didn’t need to make sure I picked one that would give me the scope to write a whole series. The Crimean War is just the first stepping-stone on Jack’s adventures.

RL: Tell us a little about Lark… he sounds quite Sharpe-ish in outline. 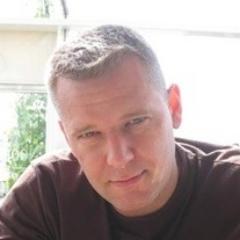 PC: My agent, Dave Headley, once described Jack Lark as a cross between Sharpe and the Talented Mr Ripley and I think that is a succinct outline.

Like Sharpe, my hero, Jack Lark, comes from the lower rungs of society. He is certainly a bit of a rogue but he is driven to better himself, something that is not easy in the Victorian period. This ambition sustains him when he seeks to force himself into the world of officers.

Jack is also no shrinking violet and when the fighting starts, he discovers a talent for battle. The pair share an ability to lead men in battle, setting the example that inspires their men to follow them, even when it means marching directly into the enemy fire.

I would say Jack lacks some of Sharpe’s hard edge. He is tough but not as experienced or as battle-hardened. He is learning his bitter trade and his experiences change him and mould his character. He is by no means a finished example and I hope to show how the fighting and the experience of war impacts on his character as the series develops.

RL: Do you have a plan for where the series will lead?

I certainly do! I love my lead character, Jack Lark. He has a wonderful ability to crop up anywhere so I can set each instalment in a new setting.

Book 2, The Maharajah’s General, is scheduled for its launch in November and will see Jack in India where the East India Company is at the height of its powers. From there I plan to take Jack to Persia and then perhaps the Devil’s wind of the Indian mutiny will sweep Jack up and cast him into the violent struggle between the British and their native troops. From there, I can see Jack travelling all over the world, from America to Australia and on to the Orient. There really are so many possibilities that I am confident I can write as many books as Headline ask for!

RL: I see that your agent is the estimable David Headley. Obviously a good choice, but how did you secure his services?

PC: I am fortunate to have Dave on my side. I do not think there are many agents out there who are also top booksellers and this gives him a unique position and insight into developing a new author. Not only can he advise me and guide me but also he can actually sell my books. That is a potent combination. 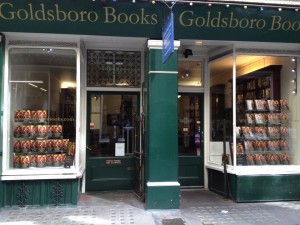 Launch Day for The Scarlet Thief at Goldsboro Books. Click on the image to see the full double window splendour!

Like most wannabe writers, I went through the dreadfully nerve-shredding process of submitting my first three chapters and a synopsis to agents. I tried hard to find agents who showed an interest in historical fiction and I came across Dave on Twitter. I suspect my covering letter was a little suspect (Dave kindly describes it as being “confident”) but happily for me he saw enough to ask to read the full manuscript and offered to represent me shortly after.

RL: You describe your writing as ‘just going for it’. What is the working day?

PC: I have been writing on my daily commute for the last few years and so my day starts with the 6.20 train from Canterbury to London. I get a good hour’s writing done every day on the way to work and it certainly makes the daily drag go quickly. I then spend the next ten or eleven hours or so at my desk in the City before I can escape back to my writing on the train home in the evening.

My first attempt at writing was started on the train when I quite simply opened my laptop and started writing. It shouldn’t be much of a surprise to discover that my first effort was rejected by the dozen or so agents I tried but at least it started me off on my ambition to become a writer. My second attempt was planned and researched in much greater detail and that is the book that went on to become The Scarlet Thief.

RL: I liked your description of a seventies childhood – Commando comics, toy soldiers and war films – very similar to mine! Do you think the recent spate of soldier fiction owes something to the gap between the dreams of our childhoods and the – more protected? – world of today? (That said, my own children have a commando subscription, watch war films past and present… and play video games about soldiers).

PC: I am not sure I agree that the world of today is more protected. If anything, my fourteen-year-old son’s world is dominated by war and conflict in a way mine never was. The growth of graphic computer games like Call of Duty and the more realistic portrayals of battle seen in TV series like Band of Brothers or films such as Saving Private Ryan, have given today’s teenagers a very different insight into combat. My son certainly understands the brutality and sheer horror of war much better than I did. Looking back, I am not sure I ever thought about war in quite the same way as he does and to my mind that has to be a good thing. Perhaps the next generation of historical fiction writers will be very different to those writing now, with their renditions of battle developing in a different way to those of us influenced by films like Zulu (still the best film ever in my opinion!)

However, no matter how graphic these modern games and films have become, my son still enjoys learning the history of the campaigns and battles in our past and we spend a lot of time talking and discovering the past together. My two daughters are also fascinated by history so as a family we often visit museums or historical sights just as I did with my family when I was young (and yes they sometimes moan about being dragged around some ancient roman ruin when on holiday just as I am sure I did!). My son even enjoys playing with my treasured collection of World War II soldiers and I see him recreating the same scenarios that I enjoyed so much when I was younger. So perhaps things have not really changed much at all.

RL: To finish on a business question… when we post this interview I will let our society members know about it, and I’ll post to groups on Goodreads – and the response (I know) will be: when can we get this book in the US, Canada, Australia, New Zealand et al. How have overseas rights sold? Presumably the digital editions are available everywhere?

PC: I am fortunate that my contract with Headline was for worldwide rights. Trade paperback editions came out on the same day as the hardback here in the UK ((9th May) and I am told that it is already available across the British Commonwealth including Canada and Australia/New Zealand.