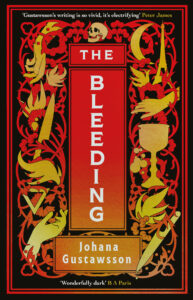 1899, Belle Époque Paris. Lucienne grieves for her two young daughters, who are believed dead after a horrific house fire, though no bodies are found. Lucienne claims they are still alive and with the assistance of socialite Violette de la Courtière she becomes involved in the world of the occult in an attempt to communicate with her girls.

1949, post-war Québec. Teenager Lina, who is mercilessly bullied at school, is befriended by Lucienne, an elderly lady who is an inmate at a rest home, formerly a mental asylum, where Lina’s mother works. The old lady shares her interest in witchcraft and devil worship with Lina and takes her to a small brick building in the grounds that is not a tomb, as Lina suspects, but is a place of life and rebirth where Lina will be able to summon the spirits, make her demands and achieve her heart’s desire.

2002, Québec. Detective Maxine Grant, struggling after the recent death of her husband, the mood swings of her teenage daughter and the demands of a new baby, is faced with the horrendous murder of a man, apparently by his wife, Pauline, who used to teach Maxine and is remembered fondly by her. During the investigation, horrific discoveries are made that lead to a brick building in the grounds of a house that used to be a rest home.

For her latest novel The Bleeding (Orenda, 2023), Johana Gustawsson initially intended to write about ‘The Hermetic Order of the Golden Dawn’, more commonly known as ‘The Golden Dawn’, which was a secret society devoted to the study and practice of the occult during the late 19th and early 20th centuries. However, The Bleeding actually doesn’t contain anything about the society. Gustawsson explains that ‘the research on The Golden Dawn led me to the Paris of the Belle Époque, and to witchery, and I got completely immersed into it, finding how women at the time used witchcraft to escape the patriarchal society.’

Such was her enthusiasm that she decided to take ‘my readers with me on that fascinating journey.’ Gustawsson spent months researching, helped by her English translator, David Warriner, who is Canadian and put her in touch with a crime scene investigator from Québec. For the research on witchcraft, séances, and Belle Époque Paris, she says ‘I laced my journalistic shoes and read quite a lot on each subject, gathering the necessary knowledge and information to write everything accurately, as I think it’s paramount to respect history. To me, it is untouchable and sacred. We have to witness it without altering it. And that’s how I proceed with all my historical thrillers, dancing around history without stepping on its feet!’

Each of the three stories that make up The Bleeding is complex with its own gripping intrigues, dark rituals and macabre practices and the consequence of the first sin ripples through the years until the startling denouement.

Gustawsson admits that for such a complex plot she needed to be a planner. ‘I know the solution (who the bad guys are, as my eldest son would say), then I create the twists and finally I design the different chapters with broad strokes, which I call the skeleton of the book, even if I should say “skeletons” as I have three here, one for each story and character.’

Even with such planning, Gustawsson was still sometimes surprised when, for instance, ‘one of the twists appeared to me as I was writing, and I was thrilled with it!’ Gustawsson considers The Bleeding to be ‘like a braid, made with three strands of stories. As I already knew the twists and turns of the plot, I just had to make the different herrings and findings mirror each other in each strand. I absolutely love that part, as it’s like fitting the different pieces of the puzzle together, creating an intricate and fun mind game for my readers.’ Gustawsson admits that she has been influenced by Agatha Christie, who said that she always knew the ending of her novels before starting to write. Similarly, Gustawsson admits she ‘adopted the exact same method: I knew from the start what my ending would be.’

Although the stories of each female are told in a staggered manner throughout the book, Gustawsson actually ‘wrote the three parts one after the other, starting with Maxine, as it’s the investigative part and the densest with information, then I dove into the Belle Époque with Lucienne and I finished with Lina.’ Gustawsson confirms that each of the main females is fictional but ‘my characters always appear to me very clearly: I hear them talk and think, and I see them move in front of me as if they were real. I can, for example, bake for my three sons and imagine what Maxine, Lucienne or Lina would say. I absolutely love getting into the shoes and heads of my characters: it reminds me of my acting years!’ When asked if she had a favourite character, Gustawsson pleaded, ‘do not ask me to choose between my girls, it would be like having to choose between my three sons.’

The Bleeding belongs firmly in the genre of the Gothic thriller but Gustawsson considers the theme running through the book to be the very serious one of motherhood and ‘the extremes we can go to, to try and save the ones we love.’ The extremes are indeed violent, dark, macabre and harrowing but without spoiling the plot in any way, Gustawsson’s belief is that the ending of the novel is ‘full of hope.’

Currently a bestseller in France and soon to be adapted into a TV production, The Bleeding is intended as the first in a new series. It was translated into English by David Warriner.

About the contributor: Marilyn Pemberton has a passion for fairy tales that subvert and challenge the social mores that exist at the time. Pemberton has written the biography of a Victorian fairy-tale writer, Out of the Shadows: the Life and Works of Mary De Morgan, and fictionalised De Morgan’s life in The Jewel Garden. In her historical trilogy, Grandmother’s Footsteps, the main female protagonists from different generations write fairytales that express their frustrations at the constraints imposed on them and offer different solutions. The first two books of the trilogy, A Teller of Tales and A Keeper of Tales, are now available and A Seeker of Tales is in progress.