Life in the Caves: The Vineyards of Champagne by Juliet Blackwell 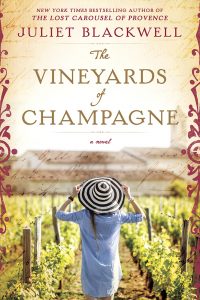 Recently, I went to see Sam Mendes’s fine film, 1917. Before that I read The Alice Network by Kate Quinn, a novel set in 1947 but a reflection on the female spies of World War I. Peter Jackson of Lord of the Rings fame also chose to revisit World War I through a 3D documentary, using old film footage and survivor testimonies. Perhaps the centenary, or its approach, of the end of what was once called “The Great War” inspired authors and filmmakers to revisit that conflict, tease out its lessons as well as its horrible mistakes. Juliet Blackwell’s dual-period The Vineyard of Champagne (Berkley, January 2020) has entered into this foray with a thoughtful contemplation on the experience of The Great War in the celebrated region of Champagne, more particularly in Reims—for those not in the know, pronounced as if it rhymes with “France”—and the fictional village of Cochet.

In the present day, recently widowed American Rosalyn Acosta, who works for a Napa-based wine importer and distributor, must travel to Cochet to visit some producers her boss hopes to do business with. Due to her precarious financial position, Rosalyn must work at this job that she does not enjoy—despite the perks—and so reluctantly crosses the ocean to connect with producers in the area. On the plane to Paris, she meets Australian Emma Kinsley who is also visiting the Champagne region to track down information on a WWI soldier, Émile Paul Legrand, with whom her aunt communicated in an obscure tradition known as the marraines de guerre—war godmothers. Through the fog of grief, Rosalyn resists the friendship of Emma and others, but finally capitulates, helping Emma in her research, connecting romantically with one wine producer in particular, and finding a new career path to help jumpstart her life.

Blackwell’s inspiration for this novel began when she tagged along with a wine-importer boyfriend to Champagne, despite not being—like her protagonist—a big fan of the region’s famous bubbly wine. There Rosalyn –and Blackwell—found those incredible caves—a French-specific word referring to the storage area of wine, located deep in the bowels of the earth, protecting it as it ferments and ages—forming a labyrinth beneath the city of Reims, the city of Épernay and many other villages in the area. During WWI, as Blackwell’s novel reveals, hospitals, cafés, schools, even concerts, were held in the caves as German bombardment made life above ground not only dangerous, but impossible. 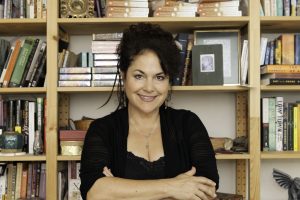 Rosalyn’s widow status gives more depth and complication to Blackwell’s protagonist, allowing her to not only find a deeper connection with the women who survived WWI, and whose male family members did not, but also to help navigate Blackwell’s own journey of recovery after a similar family loss of her own. Thus, grief over the death of a loved one—living with it, overcoming it, and emerging from it—is an important theme of this novel. A further complication that Blackwell adds to this effervescent story is the flawed character that is, in the present story line, Rosalyn’s deceased husband: Dashiell Lacosta. This husband’s first name may be an allusion to the author of original hard-boiled detective novels like The Maltese Falcon: Dashiell Hammett. Hammett struggled with tuberculosis most of his adult life, had a failed first marriage like Blackwell’s character, and a subsequent affair with a woman nine years younger than him: Lillian Hellman. Perhaps more importantly, Hammett, although a brilliant creator of fiction, could not manage his finances well; neither, Rosalyn discovers, could her Dash.

Blackwell had several reasons for making Dash flawed, resulting in Rosalyn’s dire financial circumstances at the time of Dash’s death. Blackwell reveals that, in order to “pile problems onto [my] characters” and push them into revealing “their true character,” the “[f]inancial need [she faced] meant that Rosalyn has to continue working in a job that she doesn’t much care about.” That job also offers the obvious escape from the grief that she struggles with as she finds ways to re-connect amidst the vineyards of Champagne. Blackwell’s own experience helps in shaping this character, by responding to the counseling that often suggests that the bereaved “go back to work . . . largely because the daily routine can be helpful psychologically.” Further complicating this grief and financial mess are the aspect of anger and betrayal often experienced by the bereaved through their sense of abandonment.

Blackwell balances present-day Rosalyn’s journey through grief with the historical story of Lucie Maréchal, a Reims native, and Émile Paul Legrand. We get to know them both through extant letters Émile wrote to his Emma’s aunt. Lucie, in an alternating first-person point of view, eventually joins other Champagnois that move underground to escape German bombardment. Her voice offers reflection and despair over her position, from declaring “a necessity of beauty” to the stark record of how “more than a thousand shells were showered on Reims” on February 22, 1915. Rosalyn also finds this “necessity of beauty;” she is an artist, unable to paint since Dash’s death. Blackwell argues that beauty “can be part of the healing process, but more importantly, even being able to recognize beauty can be a sign that one is returning to the possibility of joy.”

Returning to 1917–an engaging film dedicated to director Sam Mendes’s own grandfather who fought in that war–and the recent interest in that war to end all wars, as it was once known, brings to mind Hilary Mantel’s claim in a 2009 Guardian article about the importance of engaging with the past. Blackwell, on considering Mantel’s insistence that, “without engaging with the past is to live like a dog or cat rather than a human being,” claims that it is “the everyday lives and the grit of the people living through war” that interest her. She argues that “[l]ife in the caves was very much a woman’s world,” rather than the man’s world above the caves, occupied with aggression, war, nationalism, and conquest. Most importantly, perhaps, is the sense of history, Blackwell argues, that permeates the region of Champagne. “I know that history helps me to understand a bit of the character of the French people in general and the Champangois in particular; they live side-by-side with the knowledge of their history, and their grief, and their survival.”

Blackwell’s The Vineyards of Champagne is about survival, about negotiating the challenges of grief that will visit each one of us, about enjoying life, and about re-discovering love. Like 1917, it ends with the promise of love, the strong emotional ties that support us, and the hope of a future without catastrophic destruction.

About the contributor: Terri Baker is an English Literature and Composition instructor at Mount Royal University in Calgary, Alberta. The focus of her PhD was historical fiction, in particular the contemporary critique found in Hilary Mantel’s Wolf Hall and Bring Up the Bodies.