M. B. Zucker has been interested in storytelling for as long as he can remember and began writing when in middle school. He wrote his first novel, Lio: King of the Carnivores, when he was fourteen, and his second novel, A Great Soldier in the Last Great War, when he was sixteen. Both became Amazon bestsellers. He earned his B.A. at Occidental College and his J.D. at Case Western Reserve University School of Law. He lives in Virginia with his wife.

He discovered a love of history at fifteen and has studied Dwight Eisenhower for over ten years. His first adult novel, The Eisenhower Chronicles, is a biographical novel about Dwight Eisenhower. The novel is told through a series of stories that are designed to stand alone but, together, bring Ike back to life and present his place in history as the most important individual in defending the world from fascism, communism, and nuclear weapons. The chronicles were originally released in three volumes: For the Good of Mankind released in September 2021, A Dove in Hawk’s Clothing released in December 2021, and A Just And Lasting Peace released in March 2022. 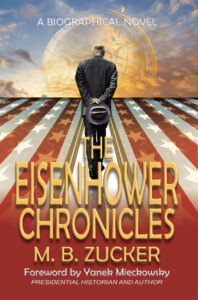 How would you describe this book?

The Eisenhower Chronicles is a biographical novel about Dwight Eisenhower, the general and president. It follows his story through 15 episodes set during World War II, the Cold War, and the Civil Rights Movement. The main theme is Ike’s conception of duty, which he viewed as the obligation to restrain his selfish impulses and to work for the benefit of others.

What inspired you to start writing and what has been most rewarding about it?

Steven Spielberg’s film Lincoln gave me the idea to one day write a novel about Eisenhower. I saw the Ike novel as a long-term goal. In law school, I wanted an activity that was not law-related. My hope is that The Eisenhower Chronicleswill allow readers to appreciate and know Ike more. Writing the novel has been my most rewarding professional experience and convinced me to make biographical historical fiction the primary genre of my writing career.

What attracted you to writing historical fiction?

Spielberg’s Lincoln opened my eyes to how historical fiction can focus on real people and events, blending true stories with entertainment.

Is this a stand-alone story or will there be additional volumes? What are you working on now?

This novel stands alone. I am currently writing a novel about John Quincy Adams’s time as Secretary of State. Both novels focus on American foreign policy and have thematic similarities, as Adams obsessed over “virtue” the way Ike did over “duty.”

Does any part of your own life experiences connect with any part of the story? What difficulty did you have in writing it?

I think anyone who struggles with controlling their emotions will relate to Ike in this novel. Fulfilling his duty filled his mind more than anything else, and it often involved restraining his emotions and subconscious desires so he could see the world objectively and do what was best for everyone, not just himself. I wrote the novel while in law school, which is known to be a stressful environment. I related to his efforts to rule my emotions instead of them ruling me.

Why the focus on Eisenhower now? Is there a key historical event you found in researching that inspired you to write this story to portray a key message prevalent now?

When I learned the full story of World War II in history class, I was hooked. Ike emerged as my favorite “character” of the war. In high school, I became interested in his presidency. His efforts to avoid war, especially World War III, resonated with me in the aftermath of the Iraq War, and his political centrism caught my attention in the hyper-partisan 2010s. I think Ike’s policies provide a roadmap for how America can overcome some of its current crises, whether it be Ukraine, polarization, or climate change.

How did you balance the research with writing the story? Did you get to do any interesting interviews for your research?

I read as much about Ike as I could, including nonfiction books, online articles, and archives. That gave me a good basis to write the novel. When writing an episode or scene I would use what factoids about it I had to plant seeds and then fictionalize what I needed to so it would function as a story. The episodic structure allowed me to play with history.

I didn’t conduct many interviews, but I’ve become friends with Susan Eisenhower, Ike’s granddaughter, since writing the novel. We’ve had several interesting discussions about her grandfather and the events portrayed in the novel.

How do you think the reader will connect with them?

Readers will see up close how the Allied warlords debated grand strategy for how to defeat Hitler and his followers. They’ll also see how Ike devised the nuclear deterrent and triad, which remain the centerpiece of America’s global security architecture. Ultimately, I think Ike’s humanity will make the biggest impression on readers. He felt as deeply as anyone, and the moral system he developed to regulate himself can be a great tool for both individuals and societies. 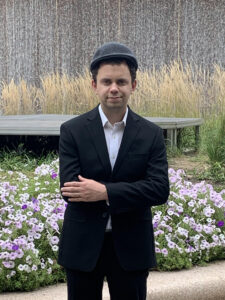 Every author has his or her own publishing journey. Tell me about yours.

My family and I self-published my first novels. I sent query letters to a couple of dozen agents for The Eisenhower Chronicles. Most wanted evidence of audience interest before they would look at the book. My wife and I then self-published the novel in three separate volumes. We were working on releasing the complete volume when I stumbled upon Historium Press on Facebook. I reached out to them.

What advice would you give to other aspiring historical writers?

Do your research. Read all you can. Remember that writing is a skill that takes practice to grow.

What is the last great book you read?

I recently finished reading Memoirs of Hadrian by Marguerite Yourcenar.